A Nappanee woman comforts mothers of officer killed on duty 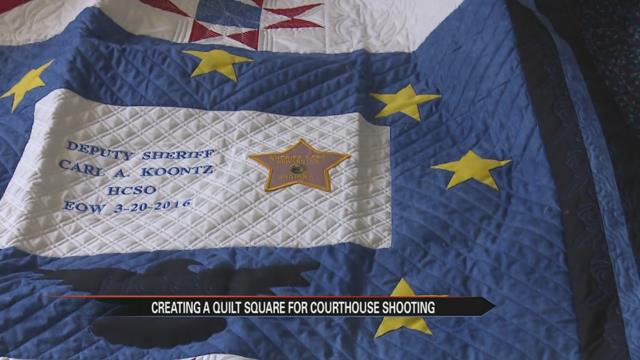 With each officer who has died in the past week, there are families left behind to pick up the pieces of their lives. One mother in Nappanee says she knows what that feels like and she’s turned to quilting to cope.

Sheri Bradway has put a lot into these humble quilts.

“The seven stars surrounding the officer’s name stand for the seven days a week you will see an officer on the street,” says Bradway.

Since then Bradway’s made close to 300 quilts for other mothers who have also lost their children.

“Ya know I’d love to go out of business tomorrow and not have to make another quilt for mother’s tears but unfortunately I don’t think it’s going to happen,” says Bradway.

Bradway’s non-profit A Quilt for Mother’s Tears will be making more quilts with the recent shootings in Dallas and Berrien County.

“Your heart sinks you know he has left a family and their life is going to have to adjust and it’s an adjust that is different,” says Bradway.

Bradway made a quilt to honor over 80 families in Indiana who have had to adjust to life without their loved one.

“This is just 25 years of Indiana officers that have died in the line of duty,” says Bradway.

Comparing officer fatalities to date in 2016 to the same time in 2015, the total number is the same at 59 deaths. Firearm related deaths have increase by 56%.

For now Bradway does what she can to help the families left behind.

“It’s just to let mom’s know that somebody remembers them they know they are not forgotten and it’s done by a mother who knows exactly what they are going through,” says Bradway.

A Quilt for Mother’s tears is funded by donations and a scholarship banquet will be held in October. For more information click here or email motherstears@centurylink.net.